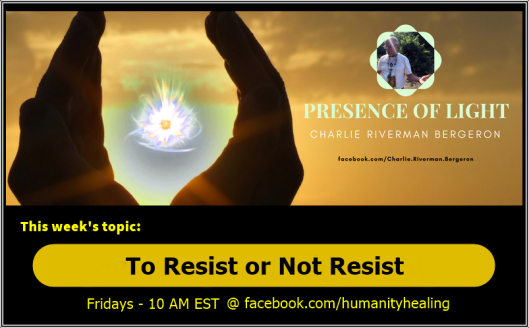 WOW!!! it has been a longer span of what we call time since I posted my Presence Of Light talks. This talk was broadcast on the 15th of March and I have certainly been in a vortex of energies which reflect not resisting.
However I feel the need to ground a little bit more now and focus on those parts of my life which nourish me.

Here are the raw show notes…

Should I Resist or Not Resist

To quote from, The Silence of the Mind by Ilie Cioara an Eastern European Mystic
“Do not resist anything you encounter:

They appear automatically from the baggage of your mind,

There is always a point where we experience resistance,
however it is only then that the question arises,

“Should I Resist or Not Resist”

For me my resistance is usually coming from a place of fear. And not necessarily one I might truly understand.
As a matter of fact lately it seems to be the latter of those places.

So let us Innerstand that Fear and Resistance are linked in many ways
and if we can manage our fears we can let go of our resistance.
SO I offer you that… Perhaps it is all about Resisting our Fear

The other day I wrote a meme for facebook…

Everyone of us who are now
Living from Our Heart are

questioning everything that was
told & sold to us. ~ Riverman

It came about as I was awakened at 222 AM by my Guides and basically told that I could not do a simple job I was about to do because it would be in violation of my integrity.

Never before in my life have I been so abruptly confronted by Spirit that fear began to flow and my resistance rose to encounter these most beautiful beings which have guided me for so many years.

I knew in that moment I was resisting and would eventually block out their message without fully listening or trying to understand it.
I knew that if they awakened me at 222 it was an important message and that I should listened very closely as it was going to be a game changer for sure.

It was then I knew that there would be a lot of changes coming and they would be placed for me to step through as I strengthened my self-respect and honoring of my integrity.

No it was not going to be a piece of cake but it would be worth far more than they could express to me in human language.

if we are willing to not resist.
It is about Creation on new levels and in order to do that we must set Intentions into motion
and if we are constantly in a state of resistance
we are in a state of conflict where the Intention gets blocked.

Our old teachings say that once we can manage our fears, we can then see that progress is impossible without resistance. Resistance is the challenge we need to overcome in order to progress.
But what if that was not the Truth but a construct created to limit us so that a few would prosper and grow while most would fail due to a lack of Trust in themselves.

When we question all that we have ever encountered and failed at we might first feel it as a lack of Trust.
A lack of Trust in ourselves and Our Spirit Guides

Our Trust is a connector in order to receive more of what we are focusing on.
When Our Trust in anything fails we are hurt EnergImotionally

and we begin to withdraw our energies our creations to soothe the source of our sufferings.

3 thoughts on “To Resist or Not Resist”